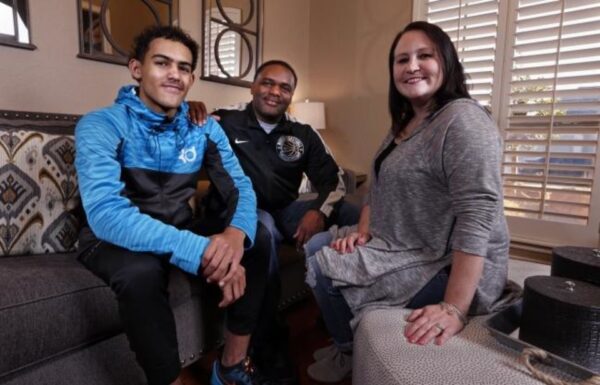 Trae with his father, Rayford, and mother, Candice.

Founded in 2019, the Trae Young Family Foundation was formed with the goal of continuing education for mental health problems, particularly cyber and social media bullying. Children and adults on a daily basis deal with depression, anxiety and PTSD, among other issues that are caused by cyber and social media bullying. With continued education and research, the Trae Young Family Foundation will inspire and help make a positive impact on children and adults from all walks of life who suffer from mental health problems.

The origin of the Trae Young Family Foundation can be found in Trae’s youth in Oklahoma.

When the Seattle Supersonics moved to Oklahoma City in 2008, none of the team’s stars—Kevin Durant, Russell Westbrook or James Harden—were from the state. But that didn’t stop them from contributing in hugely significant ways to the local community.

That was not lost on Trae. As explained in an in-depth feature piece in The Athletic:

Growing up in Norman, Okla., he and his father had season tickets for the Oklahoma City Thunder games from the moment the NBA arrived in Oklahoma City…When Young dreamed about playing in the NBA one day as he watched Thunder games from Section 119, Row R, he also visualized the lives he wanted to touch when he was in the position he’s in now. “Those were the guys who I looked up to on the court but off of it, too,” Young said. “It’s a big reason why I do a lot of stuff off the court, too.”